With the release of .NET Core 3.0, Microsoft has the next major version of the general purpose, modular, cross-platform and open source platform that was initially released in 2016. .NET Core was initially created to allow for the next generation of ASP.NET solutions but now drives and is the basis for many other scenarios including IoT, cloud and next generation mobile solutions. Version 3 adds a number of oft-requested features such as support for WinForms, WPF and Entity Framework 6.

The easiest way to get started using Angular and ASP.NET Core is to use a Visual Studio template provided by Microsoft. This template gets you up and running rather quickly but suffers from one big limitation – Angular takes over the UI leaving ASP.NET in the background, serving up an API. If you want some pages to be served by .NET and other pages to be served by Angular, you need to duplicate the look and feel and the menu structure in both ASP.NET Core and Angular. Alternatively, you can leave the entire UI to be served by a single Angular app, but then you have to implement all the pages including trivial, static content such as Contact As, Licensing, etc. in Angular SPA.

The setup I want is an ASP.NET site serving as a portal and then embed Angular artifacts into ASP.NET pages. Generally speaking, there are two architectural design patterns. Under the first design pattern, I have an Angular app with routing I want to embed into an ASP.NET view with Angular providing a sub-menu and the ASP.NET site providing the top-level menu. Under the second design pattern, I have Angular components that don’t warrant a fully-fledged Angular app, but yet there is a need to embed them in ASP.NET views. For example, suppose I wanted to embed a component that displays current time into an ASP.NET view. It’s easy to develop such a component in Angular but it’s tricky to embed it into MVC views. Lastly, I want to achieve as much code re-use as possible – I want to be able to reuse components among Angular applications as well as to embed the same components into ASP.NET views. This article demonstrates how to bootstrap your ASP.NET and Angular projects to accommodate these architectural design patterns. If you want to see the final code, please refer to the Multi App Demo repository on GitHub.

To recap, here is what we want to build:

Web Components are great and might be the future of web UIs, but as of today, there is still a place for bootstrapping Angular projects as Single Page Applications (SPAs).

Angular is designed around the concept of modules and some of the features, most notably routing, are aligned to modules, not components. When mixing Angular and ASP.NET development, my goal is to host Angular apps in MVC views. I want the ASP.NET MVC to provide the top-level menu structure and the SPAs to provide their own menu and routing structure that lives within a larger MVC application. Moreover, I want to achieve code reuse where code can be shared between multiple SPAs within the solution as well included in the non-Angular pages as web components.

The first step is to create a new application in Angular. The easiest way to do that is to use the Angular CLI (command line interface). If not already, open your Angular project in VS Code, and start a new terminal window. At the terminal, execute this command:

This will generate a new Angular application under Apps\projects\App1 with routing module configured. Let’s generate two components and setup the routes, so we can have somewhere to route to. Execute from the terminal:

You should now see two new component folders, page1 and page2, under Apps/Projects/App1/src/app.

Let’s now set up routing for these components. Change your app.component.html under
Apps/Projects/App1/src/app to have this marketup:

And update your app-routing.module.ts under Apps/projects/App1/src/app with the following code:

Let’s now test that our new application is configured correctly. Open a new terminal window and type this command:

Your browser should open and you should see something like this 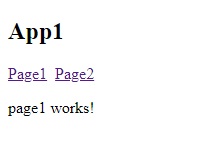 Notice we are using port 4201 which is different from the port we used for the root Angular project. Each app you create will need to be served on a different port in development, but in non-development environments, all apps; ASP.NET and Angular, will run on the same port.

Now, one objective of this demo is to achieve code re-use. Let’s now reuse the Angular component from the base project in App1. To do that, include an import of the CurrentTimeComponent in the App1’s main module.

Go to app.module.ts under Apps/projects/App1/src/app and add the following import statement:

Now, go to app.component.html in App1, and add the tag for the current time, right below the router outlet.

Save all files and check the browser. Your App1 page should now show the current time component.

Integrating App1 into ASP.NET MVC as a SPA

The last thing we want to do in this walk-through is to incorporate App1 into ASP.NET MVC app as a Single Page Application. We want the following features:

In your MVC project, go to Controllers/HomeController.cs and add the following code:

The {*url} construct in the Route attribute tells ASP.NET to capture everything to the right of the /app1/ segment in the url variable. We will then pass this down to the Angular application.

Now, right-click on the View() token, and select Add View. Call the view App1 and click the Add button. This should create a file called App1.cshtml in Views/Home. Make sure the file has the following mark up:

Go to Shared/_Layout.cshtml and add a link to this view right under the link to the Privacy view. The easiest way is to copy the privacy link markup and replace the word Privacy with the word App1.

While we are in _Layout.cshtml let’s make one more change. Let’s add a bit of markup around the <current-time> web component to have a visual indication this is a web component and not an Angular component. To do that add <HR> and a comment:

Next, let’s test the app. Hit F5 and make sure you can navigate to App1 view via the App1 link.

The next step is to embed the App1 application into the App1 MVC view. We are going to use an iframe that points to a URL on the same domain. Using an iframe has the benefit of encapsulating App1 in its own container, but presents two challenges:

We will solve both of these challenges using JavaScript. This is only possible because the iframe points to the same domain; thus, avoiding cross-domain restrictions.

But, before we do that, we still need to do a few more modifications in the .NET code.

This code tells the .NET core runtime to map the app to /apps/app1 path, to proxy to port 4201 in development and to expect the compiled files to be available in wwwroot/apps/app1 in non-development environments.

This is where we are going to use an iframe. Open App1.cshtml and add the following markup:

Note the @Model construct. This is mapped to {*url} in the component — we are passing the portion of the path to the right of app1 from the top window to the iframe, so routing works inside the Angular app.

At this point, we can test the app. Go to VS Code and execute the following serve command from an available terminal window:

This command starts App1 on port 4201. It sets the base HREF since we know it’s going to be served from apps/app1, and it instructs Angular to use localhost:4201 for live reload instead of using relative URLs.

Go to Visual Studio and hit F5. After the ASP.NET site comes up in your browser, navigate to the App1 menu. If you see a screen similar to the following, it means the app is wired up correctly.

While the App1 Angular application does appear inside the App1 view, the content is cut off; moreover, if you click on Page 1 and Page 2 links, you can see the navigation is working inside the Angular component but the top address bar in the browser does not reflect the current state of navigation. Let’s fix both of these issues.

To resize the iframe with content on startup and any time the content of the iframe changes, we will use a JavaScript component called iFrame Resizer created by David Bradshaw.

There are three steps we need to do in order to make this component work.

In _Layout.cshtml, paste the following script tag right above the script tag pointing to site.js

Add the following line of code to site.js, located in wwwroot/js.

Next, go to VS Code and right above the closing </body> tag, add the following script tag to Index.html located in Apps/projects/App1/src:

Save all files and let’s retest the app. App1 should now look like this:

Notice how the content is no longer cut-off. The nice thing about iFrame Resizer is it will keep the iframe resized to fit the content after the initial load of the iframe.

Let’s now address the issue of the address bar not being updated when the Angular router links are clicked. It’s not updated is because App1 is running inside of an iframe. The iframe’s address is changing but we don’t see it because the address bar we see is for the top browser window.

Remember we already have the code to capture the path to the right of the /app1 URL segment into {*ulr} variable and pass it to the iframe. What we need to add is code to go the other way – when routing is engaged inside the Angular app, we want the changes to be propagated to the top address bar.

To do that we need to add code to the routing module in the App1 application.

Open app-routing.module.ts located in Apps/projects/App1/src/app. Add the following code in the constructor of AppRouting Module:

You will also need to add Router and NavigationEnd to the imports. Your entire app-routing.module.ts should look like this:

To test the app, start it from Visual Studio. Click on Page1 or Page 2 links. Observe the top URL is now changing. You can also copy the modified URL and paste it into a separate window, and App1 will route to the component specified in the top URL.

There is one last thing to do. We need to modify the project file to incorporate the Angular build tasks into the publish process. To do that, go to your ASP.NET project, right click on the project file, select Edit <YourProjectName>.csproj. Your project file should look similar to this:

The interesting part here is the Target tag. We instruct the build process to run npm install, then build both Angular projects, then copy the dist folder output to wwwroot folder of the ASP.NET site.

To test that our publish configuration works:

At the end of the process, you should see the full path of the folder where the new files were published in the Output window. To test the published site:

We created an ASP.NET site, integrated it with two Angular projects and embedded Angular artifacts into MVC views. If you want to play around with the solution, I encourage you to clone the project from GitHub. Try adding App2 and serve it from a different MVC view or try creating more web components.